For many years I hosted Super Bowl parties. We had great times, but I rarely watched the game, much less the commercials or halftime show. This year was different. We sat home, by ourselves and hung out. Man, was that relaxing and for once, I got to see a majority of a really good game.

I also watched the halftime show. It was entertaining, but I thought Katy Perry’s sharks looked a bit out of time. I wasn’t alone. The Internet went crazy over it and new meme was born – “Left Shark.”

A couple of weeks later an artist from Miami designed a few caricatures based on the shark and began selling them online as 3D printed figurines. Katy Perry’s team got wind and her legal team fired off a cease-and-desist letter. Since then, the debate has raged. Did the artist violate Ms. Perry’s intellectual property rights? Was the content even protectable? Lawyers on all sides weighed-in. The characters were removed from one website, appeared on another and eventually returned to the site where they originally launched.

The debate is far from over. They’ll probably battle it out for years. The artist even started a crowdfunding campaign to finance his legal defense.

As I sit here writing this I’ve got the Shirley Bassey song stuck in my head…”it’s all just a little bit of history repeating.” I’ve said this so much lately that I must sound like a fucking parrot, but, those who ignore history are doomed to repeat it.

Remember the music industry’s campaign to end file sharing (or pirating, depending on your viewpoint)? Lots of people got sued and lots of lawyers got rich, but in the end, digital technology proved too powerful. Record labels eventually figured out that it was easier to participate than fight. Since then, music services like Pandora and Spotify have built huge audiences. For many, streaming is now the defacto way to jam to their favorite tunes.

The entertainment industry has a huge opportunity to learn from its own recent history.

3D printing allows people to create physical products from digital files. Because it’s digital, it removes many of the barriers typically associated with making and selling things. No big, upfront investment in manufacturing means nearly anyone can turn their idea into something real. No long lead times, means they can operate in the moment. Further, online marketplaces make it possible to list and sell nearly anything, quickly and with little effort.

The genie is out of the bottle. There is no way to stuff it back in. Instead of trying, entertainment brands need to think about how they can leverage this new digital technology for their own benefit and the benefit of their fans.

When the Katy Perry thing went down, I immediately reached out to her people and suggested that they play offense versus defense. Instead of trying to fight the designer, why not leverage the same tools he had used? Here’s how.

First, Katy Perry’s team could have created their own 3D printable products. It’s not that hard. In fact, I asked our design team to come up with some ideas and sent them along with my suggestions. Here are some examples we sketched up for Ms. Perry’s team: 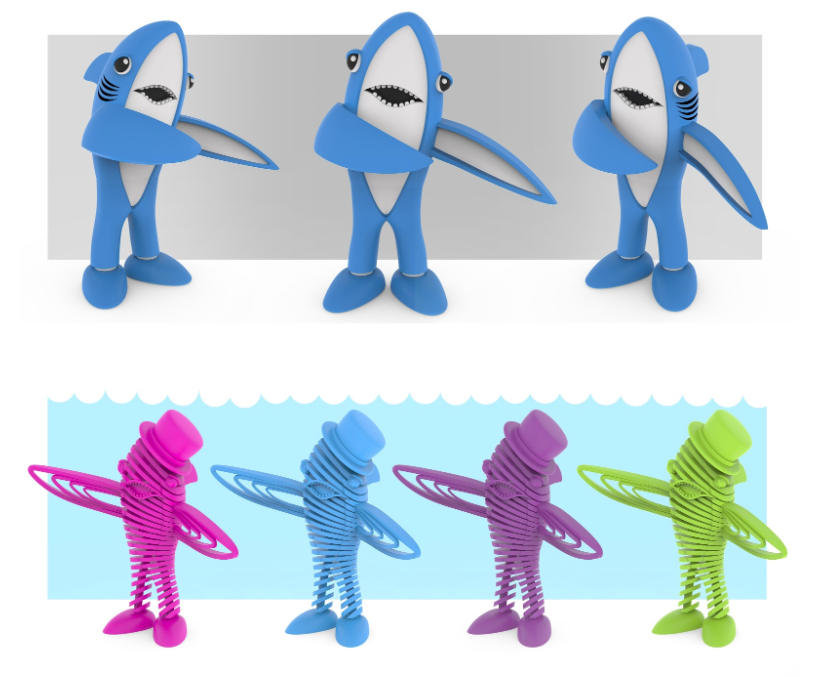 But, instead of selling them on niche websites, I recommended they go for mass distribution. My company, 3DLT, already sells 3D printed products through Amazon and Walmart, among others.

Second, I recommended that they create an opportunity for her millions of fans to contribute. Mine was not a new idea – it’s crowdsourcing 101. It’s been happening for years with other products. In the t-shirt business for instance, crowdsourcing is already an important (and profitable) component of brand licensing. Now its being applied in 3D.

I’ve worked with lots of designers in my career. While 3D printing is still relatively new (for consumer products at least) there is a growing number of industrial designers, mechanical engineers, game animators, makers and others who are ready, willing, and able to participate. Some know what they want to create and focus on specific niches. Others have the talent, but are in search of ideas. Nearly all of them want big distribution and many would benefit by designing products for a ravenous audience.

I think it comes down to a simple formula:

So, instead of battling individual creativity, foster it. Give as many people as possible an avenue to participate. Yes, you will get equal parts good, bad and ugly in the process, but it’s not that difficult to separate the wheat from the chaff. In our case, we apply business rules to ensure brand standards are met and provide approval checkpoints that guarantee our licensors get the final say in what is promoted and sold.

Imagine the scenario for the independent designer who created the Left Shark figurine. If he had a choice, and could either sell his design on his own or create official merchandise for Katy Perry, which would he be more likely to do? Run the math. Would you rather get a bigger chunk of a small pie, or small piece of a very big one. While some might go it alone, doesn’t it seem more likely that the latter opportunity would be more compelling?