A couple of weeks ago I was cruising my LinkedIn feed and noticed a post from Matthew Pasha. He’s the Marketing Manager for Digital Manufacturing Technologies at Underwriters Laboratories (UL). He was announcing an open house for the grand opening of their new Additive Manufacturing Competency Center (AMCC) at the University of Louisville (UofL). I signed up and today, checked it out for myself.

First, a little back story. From the early days at 3DLT, I was interested in collaborating with a major university. I’ve seen many successful public-private partnerships in my career, and thought maybe we could work with one of them to build a 3D printing “center of excellence.”

I envisioned it as a multi-purpose center, housing many different kinds of 3D printing technology. I imagined it could serve as a demo center, but also sustain itself with production.

I also thought there was opportunity in developing standards, providing training, and in material testing. Who better to provide those services than a university? Look what Rochester Institute of Technology has done in 2D printing. They work closely with the industry and have become the definitive authority on paper and ink.

I pitched the concept to several schools. One of them was University of Louisville.

When we met back in 2014, they told me they were already moving down that path. Before we met, they partnered with Local Motors and GE Appliance to open FirstBuild. But, they told me that was just the beginning. They had recently won a huge grant to build a new “institute for product realization.”

Education and testing were also part of the plan. They were definitely serious about digital manufacturing.

For us, that’s as far as it went with UofL. A few months later the news broke that they were partnering with Underwriters Laboratories. I was thrilled. I remember thinking, with UL onboard, there was a good chance that someday, something like the vision I had in my head might be realized!

And at the open house, it was all on display.

One of the hardest parts about setting something like this up, has to be getting the manufacturers on board. It was one thing in 2014, when the makers of 3D printing equipment were flying high. Lately things have come back down to earth. As a result, many have refocused on core activities. It’s easy to pass on something like this.

But from an equipment standpoint, if you’ve got a superior solution, why wouldn’t you want to showcase it in a competitive environment? It’s all about ROI. If you’re selling based on your ability to best handle specific use cases, a head-to-head demo in a real-world environment could help you close more quickly and at a higher ratio.

Just as I walked in for the open house, the presentations were starting. In addition to UL and UofL, representatives from several 3D printing equipment companies, including EOS, 3D Systems, SLM, and Concept Laser, were on hand and each delivered a quick presentation.

Each provided some insight about the current and future direction of their companies. Among that group, metals were certainly the area of emphasis. Glynn Fletcher, EOS of North America’s President, noted that their prospective customers are machine shops and that there are 20,000 of those worldwide. Others seemed to agree. Also the presenters were consistent in mentioning that, in contrast to other manufacturing equipment sales, their biggest markets are North America and Europe – not China.

It would be ignorant to assume that means China isn’t interested in 3D printing. They are the world’s biggest manufacturer and as digital technology begins to chip away at mass production, they stand to lose significant business.

It’s clear they understand this and are putting significant emphasis on 3D printing. For example, they’ve committed to put 3D printers in all 160,000 of their elementary schools by the end of this year. Those printers will probably be supplied by Chinese companies. Now granted, those are small FDM machines, but the Chinese have already proven they can go way beyond the desktop.

Gear in Use at AMCC 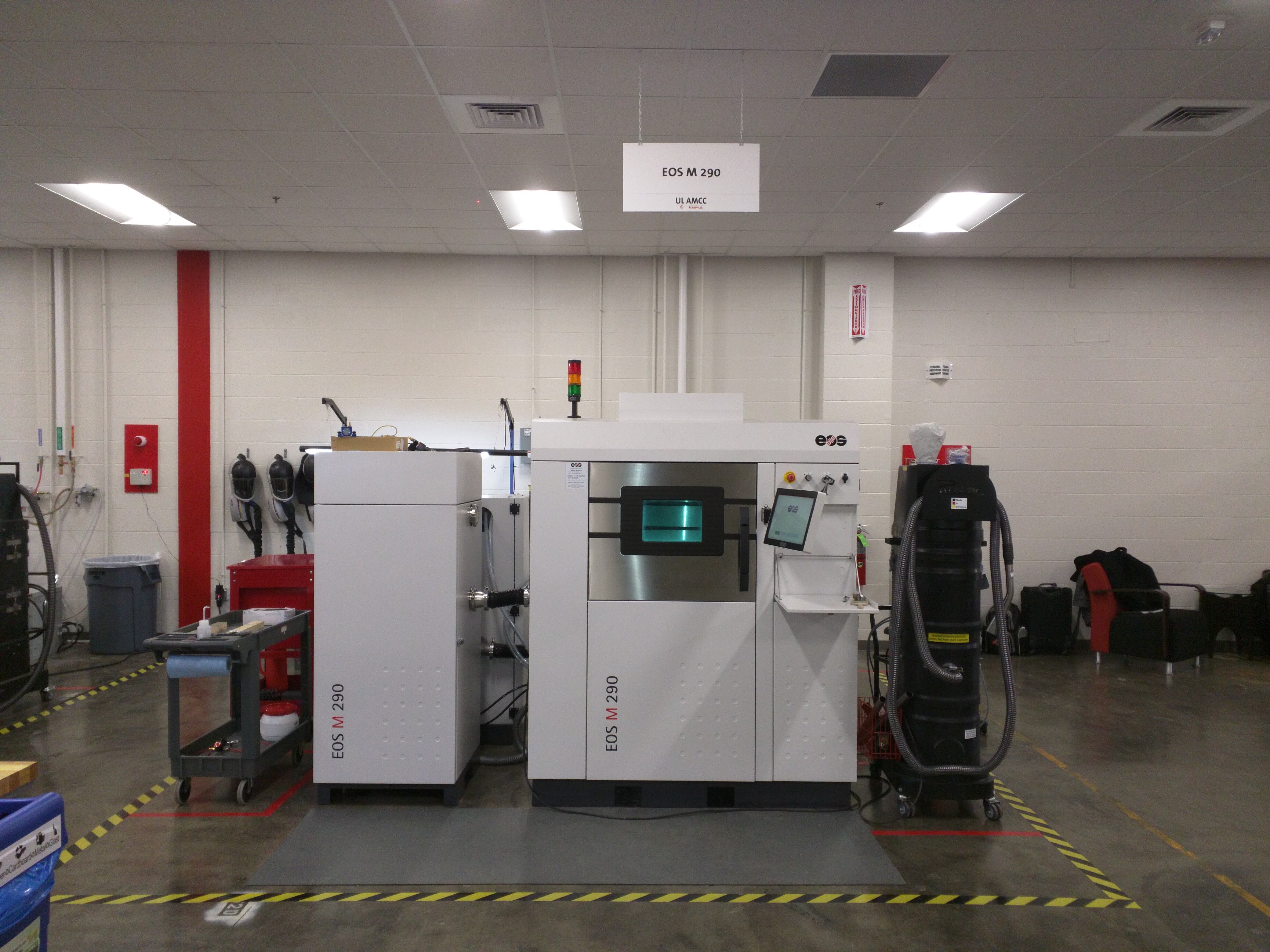 Also, in the configuration of the AMCC, they’ve gone beyond additive.

In the foreseeable future, with metals at least, 3D printing is only part of the solution. Post processing often requires traditional machine shop tooling, and in some circumstances production requires both additive and subtractive methods.

By including subtractive equipment and incorporating its use into the curriculum, UL is validating what some already know. 3D printing is not a magic box, where finished products pop out. Often the hard work begins once the print is made.

“The new AMCC is a private-public partnership between UL and the University of Louisville that combines the regulatory and safety knowledge of UL with the UofL’s significant 3D printing expertise in both metals and polymers to create a one-stop technology transfer shop for people looking to produce end use parts by 3D printing,” said the University’s Manager of RPC Operations, Tim Gornet.

The University of Louisville has a long history in additive manufacturing. Their Speed School of Engineering is well regarded. UofL was one of the early adopters of stereolithography (SLS), installing their first machines in the early 1990’s. More recently the focus has been on 3D printed metals, but they also utilize 3D printing elsewhere on campus, including medical applications at their renowned Division of Cardiovascular Medicine.

Certainly the AMCC helps UofL continue to establish itself as a leader in digital manufacturing technologies. But, the University is also making a big contribution towards the center’s success.

As Mr. Gornet put it, “The UofL will support not only the training aspect but also be able to extend the mission of the AMCC by helping companies with research on new materials, design for AM, cellular structures, as well as specific application support.”

Underwriters Laboratories is a global safety science organization and in the U.S. at least, is the defacto standard for consumer product testing. The firm was founded in 1894 and for more than a century, has participated in the safety analysis of many new technologies, most notably the public adoption of electricity and the drafting of safety standards for electrical devices and components.

At the AMCC, UL will offer hands-on training in additive manufacturing. The curriculum covers design, production, post processing and testing. 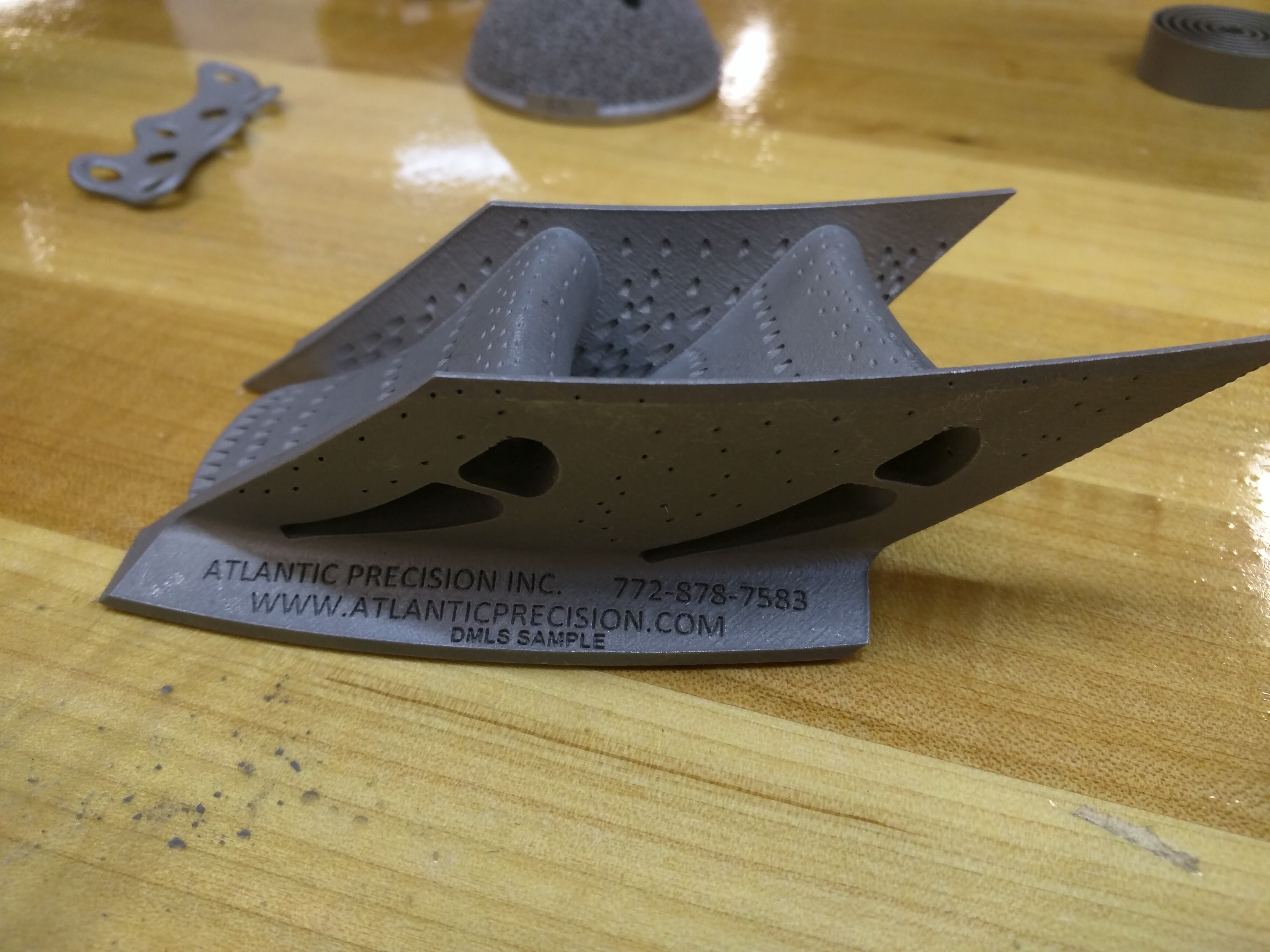 The goal of this training is to allow professionals to understand how to produce parts using metal and other emerging materials through additive manufacturing. It will also help them learn to establish safety systems, identify hazards and manufacture parts with safety built into designs.

Some of the curriculum is still in development. Chris Krampitz, UL’s Director of Innovation and Strategy, said that, “UL will contribute to the success of the UL AMCC by not only developing the AM training curriculum with the UofL, but also by bringing our deep engineering, safety and certification knowledge to the courses.” He added that, “UL looks forward to the continued collaboration with the UofL to advance AM innovation, safety and quality.”

So, who really benefits from this type of private-public partnership? Potentially, everyone in the product manufacturing value chain. They know digital technologies will impact their businesses, but many are unsure of how to adapt. Imagine what those OEM’s, suppliers, distributors, retailers, and others could learn from the services offered at the AMCC.

Further, potential users get to see it all in context and experience 3D printing in a more realistic environment. They get to see the advantages first-hand, while garnering a much deeper understanding of the limitations.

Representatives from some big-name companies attended the open house. Some, like Alcoa have already announced significant investments in additive manufacturing. Others are just getting started and were there looking for a way to get a foot in the door.

A question came up during one of the presentations. One of the attendees asked about cost. He wanted to understand the differences in cost between 3D printing and mass manufacturing. The presenters talked about budgeted hourly rates for their equipment and the cost of consumables, but nobody hit the proverbial 3D printed nail on the head.

I’ve been harping on this for some time, but customers want and need to understand 3D printing’s total cost of ownership. Not just the machine and consumables, but the labor, utilities, space and other costs associated with production. Then, they need a way to compare it to their traditional processes.

In 3D printing, speed, quality and throughput are all improving. Costs are coming down. This will directly impact the break-even for each part. Today it might be 500 pieces, but tomorrow it could be 5,000 or more. Product manufacturers need tools to help them make those decisions in real-time.

Is that easy? No. Often times there isn’t a direct comparison. But, for people to adopt they have to understand the financial benefit. For any given product there is a break-even, a specific number of parts you can produce before other methods make more sense.

It’s Snowing In the Mountains

While 3D printing technology is getting better, lately it’s been a game of hurry up and wait. New technologies are announced years ahead of their commercial availability. There’s not much the industry can do to speed that along. But, it doesn’t mean there aren’t other areas of immediate opportunity.

There’s an analogy that gets thrown around a lot in startup circles: If it’s snowing in the mountains, build a boat in a dry creek bed. That way when the water comes, you’re ready.

The 3D printing industry is projected to grow massively over the next few years. Some estimates suggest the industry could be worth $30 billion by 2025. It’s definitely snowing up there.

But what about down here? What boat should we be building? I’ve said before that I think the emphasis should be on workflow – the people, processes, and systems that will need to be in place for companies to fully leverage the capacity of these new technologies.

Between the University of Louisville, Underwriters Laboratories and the 3D printing companies they’ve already brought onboard, it seems the AMCC is in as good a position as any to build the boat – or print one at least.