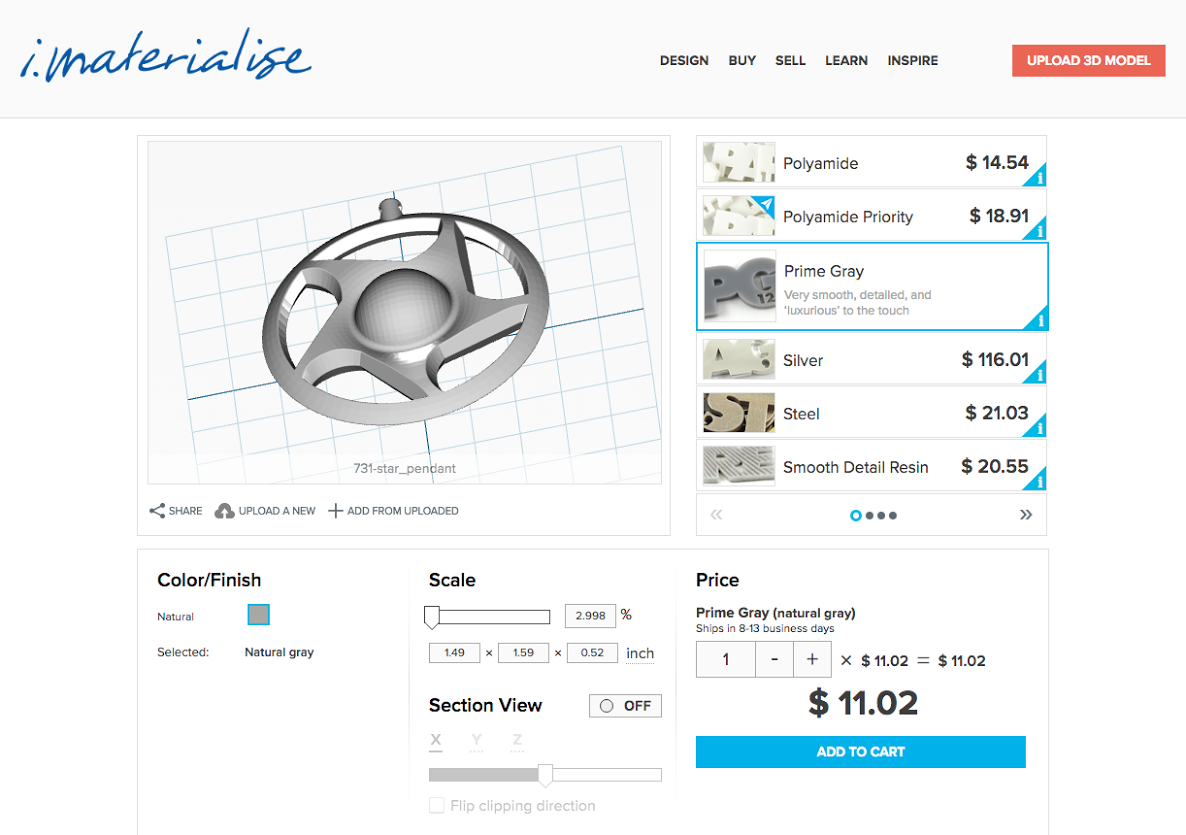 Why W23DP Is The Critical Next Step In 3D Printing

A few weeks ago I was invited to attend a private event for 3D printing industry analysts and press. Our hosts put on an amazing show. It was also a fantastic opportunity to connect with some of the biggest names in the industry. Frankly, I was humbled to even be invited, much less interact with so many smart and funny people. It was a total blast.

For many of us, it was an opportunity to meet for the first time. There were a few I already knew. One was Pete Basiliere. If you don’t recognize the name, he’s Gartner’s top analyst in the 3D printing space.

I’ve known Pete for a long time. We’re both veterans of 2D printing. Before Gartner, he ran the in-house operations for a large insurance company and spent many years in commercial print. Like me, he was there when digital printing first started to take off in the early 1990s. He’s forgotten more about workflow than most people in this industry will ever learn.

During a break, Pete and I started talking about web-to-print. I had seen this post on his LinkedIn page a few weeks before the event: He may not have been trying to coin another acronym, but I’m using it in this article (and giving him credit), so therefore he has! Congrats Pete.

Before we dive into the nitty-gritty, let’s start with a little background. In the 2D industry, web-to-print (W2P) is defined as a set of software tools that allows users to get quotes, upload files, and submit specifications for printing. W2P also typically provides some job management and reporting features for the internal print shops and external service bureaus who are producing those jobs.

Web-to-print can also involve a lot of other stuff, including customization and personalization. Those two terms are not synonymous. Customization means being able to select from a range of offerings (state, size, color, team, etc.). Personalization is defined as something that is unique to an individual.

Some end products can feature both. For example a postcard for financial services sent to a young family might have a stock photo of a family with their dog playing in the yard (customization) and text that includes the family’s name. A postcard sent to an older adult might also be personalized with their name, but have a photo of a senior couple walking on the beach.

With most W2P solutions this can either be handled one-off by the user, or in “mass” through a data upload. Sophisticated W2P systems also help deal with other important considerations such as:

All of this is important in 2D because, when you want to customize or personalize a printed product, you’ve got to deal with some really major issues, including proofing and quality assurance.

There are two separate workflows in web-to-print. Some files are supplied by end users. They create documents, browse their computer for the files and upload them to the system. In other cases, the files are created by corporate marketing staff or others, and users need to find, access, and in some cases, customize or personalize them. For example, a pizza restaurant franchisee might create a flyer that is completely unique to their location. They might also want to print the chain’s standard menu, but vary the pricing of specific dishes.

Good W2P systems enable users to do both.

One of the big drivers of W2P was eCommerce. It was one thing to be able to take an order over the web, but it was an entirely different thing when customers could actually pay for it – in advance! Before eCommerce, that was unheard of. You’d walk into a shop, submit your order, and walk out. When the job was done you’d pay for it. If you were a good customer, a shop might even extend you credit. They’d pay all the expense of sending you a bill and managing their collections. It was a royal pain in the ass.

As eCommerce became more accepted, customers became more attuned to using their credit cards to pay for purchases. That was a major reason for the success of web-based printers like 4Over and VistaPrint.

But it didn’t always work for large corporate customers. Some still wanted terms, and more frequently, wanted to pay for some things with credit cards and others with promotional funds. The ability to co-op funds is highly valuable to organizations with franchises and commissioned salespeople. They could clearly determine what got paid by the mothership and what was the responsibility of the individual user. W2P systems allowed them to establish business rules around what people, products and transactions were eligible for co-op dollars.

One of the biggest problems faced by many print customers was the difficulty of tracking use and spend. They could get an idea, by looking at a high level at what they spent with each vendor, or internally on their own equipment. But for most it was difficult to get the complete picture. If they were able to, it typically required a painful process that was loathed by their users.

W2P changed the game by also allowing them to establish business rules for specific groups of users. One line of business might could have different access to different materials than another. One group of users might get more funds allocated than another. A district manager could see the activity among their team, a region manager could see activity among several districts. A “superuser” could see the big picture or drill down anywhere in the organization.

In the early days, a printing company would approach a customer and sell them on using web-to-print. For all the reasons outlined above, it just made sense. But, eventually those customers realized they had all their eggs in one basket, or worse, were compounding their problems by using multiple W2P systems.

So, one of the more important questions to evolve in 2D web-to-print was, “who owns the software?” Most customers weren’t really concerned about owning the code or self-hosting (although some were, especially in security-conscious industries like defense, healthcare, and financial services.) More were concerned with being able to choose where, when, how, and by whom their products were printed.

Suddenly, customers wanted to separate software from print. This created a big problem for independent service bureaus. They could either ignore the problem or accept it. Those who accepted got a chunk of the pie. Those who didn’t, didn’t.

I could go on and on about the development of web-to-print, but by now you’re probably wondering if I’ll ever get back to how this relates to 3D printing. Well, history does have a tendency to repeat. I’ve talked with lots of large companies who use 3D printing and time and again, they tell me:

My Conversation with Pete Basiliere

These were many of the same problems faced by companies who adopted web-to-print for their 2D workflows. Could web-to-3D print (W23DP) provide a similar solution? That was the topic of my conversation with Pete:

Me:  How would you describe the importance of web-to-print in the 2D printing industry?

Pete:  “W2P has been enormously important to the 2D printing industry. Way back, a salesperson would literally go to the customer’s office, schmooze a little, clarify what the customer wanted (maybe even upsell) and pick up the order. W2P has enabled the printing industry to adapt as businesses and consumers moved to online ordering of all kinds of printing.”

Me:  What do you see as the core elements of a W23DP system?

Pete:  “The standard features found in any digital storefront such as custom and catalog order entry, price calculations, material and customization options, and delivery cost estimates.”

Pete:  “Presently users must develop their own tools, although commercially-available software may provide key modules such as APIs to an ERP system. There are a few providers already working on it, such as 3DprinterOS and Materialise, while others such as SAP are coming to the market.”

Me:  What types of internal systems would a 3D printing service bureau need to have in place to be able to effectively take orders over the web? How does eCommerce affect their workflow?

Pete:  “Estimating, costing, scheduling, archiving and retrieval tools are all necessary. One key will be a comprehensive yet simple to use interface that the customer can readily complete when placing an order.”

Me:  Which markets do you think will be the biggest users of 3DW2P? Is it a B2B or B2C play, or both? Will service bureaus have to choose between the two?

Pete:  “Too early to tell, frankly. B2B will certainly be bigger in the near term given the low level of consumer adoption of 3D printers and service bureaus.”

It’s clear web-to-3D print could be a significant benefit for customers, but what about the service bureaus themselves? As Pete mentioned, there are a lot of moving parts, and no real easy ways to implement W23DP. So why make the move now? I could give you myriad reasons, but I’ll focus on one. Economics.

As costs continue to fall, more and more companies will begin using 3D printing. Order sizes will get smaller and there will be less margin to cover “transaction cost.” It may cost $100 to push an order around a shop today, and that’s okay when the bill is $5,000. But what happens when the bill is $500, or even $50?

At a certain point you can no longer kill it with labor. You must kill it with technology. Those who take the lead now will enjoy a significant competitive advantage later. Does it require an investment? Yes, in capital, people, time and and other resources.

But let me ask you this. If you were going to invest in 3D printing technology right now, would you rather invest in new hardware, or better software? It seems hardware is poised to change dramatically over the next few years. Speed, quality, cost and reliability will all improve significantly. But, it will take a lot of volume to feed those beasts.

Will you have the infrastructure in place to support them?

John Hauer is the Founder and CEO of Get3DSmart, a consulting practice which helps large companies understand and capitalize on opportunities with 3D printing. Prior to that, John co-Founded and served as the CEO of 3DLT. The company worked with retailers and their suppliers, helping them sell 3D printable products, online and in-store.