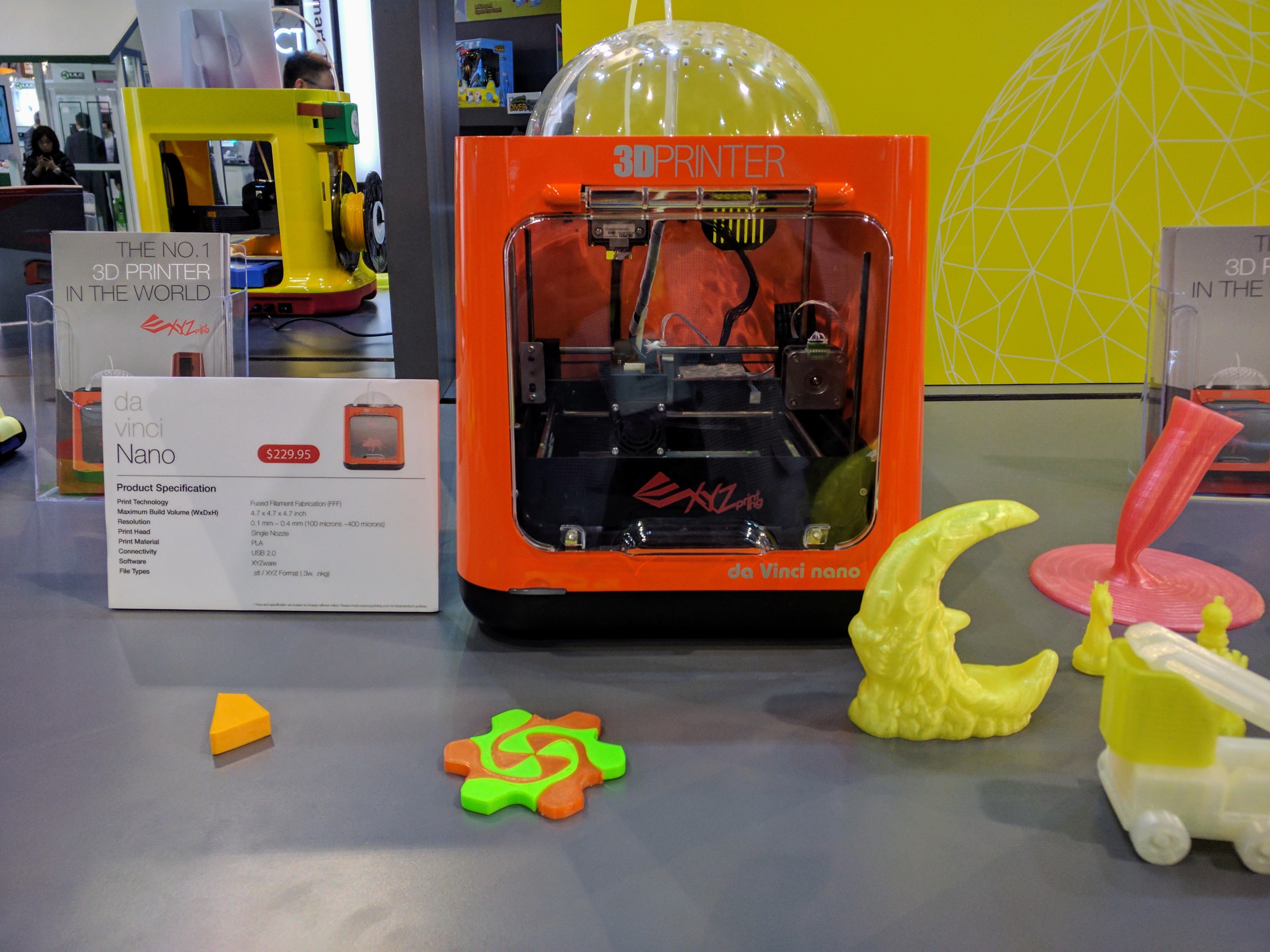 I’m back from CES 2017, and my head is full of ideas. I’ll do a more formal wrap, but I thought I’d start with a few observations, and potentially, an “out there” opportunity.

First a few insights about CES.

3D printing got smaller this year. Not only the the number of exhibitors, but also the size of their booths. Last year over 60 companies were part of the 3D Printing Marketplace. This year there were 54. In the past, MakerBot and 3D Systems were the anchors. This year 3D Systems was completely absent, and MakerBot was relegated to a pitiful spot in the back. With a few exceptions, the equipment on display was also more diminutive. Titan Robotics brought their large format printer, and Sculpteo had a Carbon 3D printer on display, but almost everything else was a desktop model.

While FDM was certainly represented it was obvious that many companies are shifting towards SLA. Formlabs is no longer the only kid on that block.

Some companies like Aleph Objects (LulzBot), Robo and XYZprinting have continued to grow their businesses in desktop FDM printing, and consumers remain a big part of their equation. But at this point, you’ve got to wonder if that part of the market will ever really scale.

Which got me thinking back a few years to the hype around consumer 3D printing. What did we see then as the game changing benefits?

We thought that it would “democratize manufacturing.”

I’ve mentioned this before, but a while back we conducted a survey with over 4,600 members of the Sears Shop Your Way loyalty program. We asked them, “What about 3D printing is so compelling?” Nearly 50% told us that it was “the ability to get access to products they couldn’t get otherwise.”

It’s estimated that one out of every thousand ideas actually becomes a product. 3D printing could help remove many of the upfront barriers and cost opening a floodgate of new innovation.

We also thought 3D printing could improve the lives of those in remote places.

At my previous startup (3DLT), we had a crowdsourced network of over 300 engineers, animators and industrial designers who contributed products to our platform. They were located all over the world. I talked with many of them and I’d ask why they were so interested in 3D printing. Many would tell me about the remote areas in which they lived. Some even lived on islands where nearly everything was imported. 3D printing offered them a way to close the gap.

Getting equipment and materials to the needed location is hard enough. But what about power? In places where electricity is plentiful, it’s not a problem. Where it’s unreliable, unavailable or unaffordable, it is.

Battery power continues to improve. Tesla’s Powerwall is aimed at the home energy market. When combined with solar panels, enough energy can be stored to power a two-bedroom home for a full day. But the cost of a system like that can easily exceed $10,000. In an area where it’s available, it could make economic sense with an ROI of 5-8 years.

On the downside, the Powerwall is a fixture. Tearing it out and removing it is neither cheap or easy. Here in the US that’s worth noting, especially when nearly 12% of the population moves each year. Among younger adults and renters, the number is much higher.

What about more portable solutions? Gas generators have been around for decades, but don’t solve the problem of supply. You still have to get fuel to the source.

One of the innovations on display at CES were portable, battery operated generators. The line of devices offered by Goal Zero enable users to power devices ranging from phones to refrigerators. The batteries in those devices can be charged using another power source or via a solar array. The cost of a complete system (generator plus solar pack) starts at about $500. A top-of-the-line system can exceed $2,000. They’re designed to be portable. They can go anywhere. If there’s sufficient sun, they can run on solar 24/7.

Could this help 3D printing become more accessible to people in remote areas?

Maybe, but battery technology has its own innovation curve and presently, there are still several challenges. First, while lithium batteries have become more efficient, there’s still a lot of room for improvement. In fact, one promising new technology could deliver 50% more energy density, providing more power from smaller cells.

Second, some of the materials used in battery production are in high demand. Right now, 45% of the world’s cobalt production is used in the manufacture of lithium-ion batteries. With all of the interest in consumer electronics and electric vehicles, demand will continue to grow.

Finally, the facilities need to manufacture batteries are limited. Worldwide capacity today is probably less than 50GWh. But, by 2020 it’s estimated that capacity could more than triple. In fact, just last week, Tesla and its partner Panasonic announced that mass production had begun at the new Gigafactory. At full speed, that facility alone could add another 35GWh of capacity.

Should 3D Printers Get Portable?

As battery power improves, it could usher in a new era of portability for 3D printers.

Remember when the first laptops came out? In 1986 they were so unsophisticated that PC Magazine published an article about them entitled, “Is It On Yet?” The article stated that “LCD screens still look to many observers like Etch-a-Sketch toys,” and that “laptops will continue to be a niche rather than a mainstream direction.”

They also tested the definition of “portable.”

In his article, “My 30 Years at PC Magazine,” John Dvorak had this to say about early laptops:

“In hindsight, the promise of powerful, personal computing was fulfilled during that two-decade span.” (1976-1996) He added that, “This moment in the history of individual freedom was further fueled by the emergence of the laptop computer, which reached its pinnacle during that second decade.” In 1988 NEC released its Ultralite 4.4 pound notebook computer. Dvorak called it a “‘$5,000 wonder machine’ that appeared ‘before the term ‘notebook computer’ even existed.”

By contrast, today’s top of the line Microsoft Surface Pro 4 weighs about 1.75 pounds, has a beautiful hi-res display and a battery that provides 9 hours of continuous video playback. It’s also infinitely more powerful and starts at $899.

Maybe the whole PC to 3D printing analogy doesn’t work for you. God knows I have my struggles with it. They’re different mediums. Computer applications are digital. Products are physical. Maybe it’s my background but I usually prefer to compare 3D with 2D printing.

But, you could also make an argument that a 3D printer is more like a power tool. Even they’ve become more portable. The first cordless power drill was introduced by Black & Decker in 1961. Throughout the 1960’s, Black & Decker, Martin Marietta and others developed cordless tools for the space program. Products developed for NASA were commercialized and led to other use cases.

Fast forward and today the power tool industry is on its way to becoming a $30+ billion industry. Corded tools still make up the majority of the market, but cordless tools are quickly taking share. For example, cordless drills made up nearly 25% of all power tool sales in 2013. Corded versions only accounted for 15%. In large part the growth is due to improvements in battery technology. More powerful batteries yield increased power and runtime, allowing cordless tools to be a viable replacement of the corded version.

Cliff Wells, the director of sales, North America for RIDGID, recently had this to say about the use-cases for cordless tools:

“The advances in battery charging times, reliability and volumes of work per charge have made cordless tools more viable power sources for some heavier-duty applications than they were in the past. But from a sales standpoint the question then becomes, ‘How much of that technology is the customer willing to pay for?’ Will the contractor pay more because it’s faster, more portable, or gives him some advantages that he doesn’t have today?”

A package including a 3D printer, battery and solar panel would be big, heavy and clunky. So what? Radios, TVs, computers, phones and power tools were all the same way when they first went portable.

Could mobility enable 3D printers to be used in more remote locations? Could they be used on job sites and in other professional environments where access to electricity is limited?

In the end it still comes down to finding “killer applications” – products that drive significant volume. But sometimes, to find them you’ve got to go where the problem exists, instead of trying to fix it from afar.

By offering a mobility package, a 3D printer manufacturer could differentiate themselves from competition, generate more revenue, and create a catalyst for new innovation.

That’s a powerful proposition for an industry in need of a boost. (Sorry, couldn’t resist.)