The Huge Opportunity For Color In 3D Printing

I think there is tremendous opportunity for color in 3D printing. Here’s why.

“For digital (2D) printing, the big tipping point was affordable color. I think the same will be true for 3D. Whether that’s best accomplished through production or finishing is a worthy debate, but how many mass produced products do you buy today that are single color? Not many.”

I wrote that over two years ago. It’s as true today as it was then. The difference now is, there are more options for producing color, and even more are on the way.

Back when I wrote that article there were only a few ways to produce color with 3D printing. 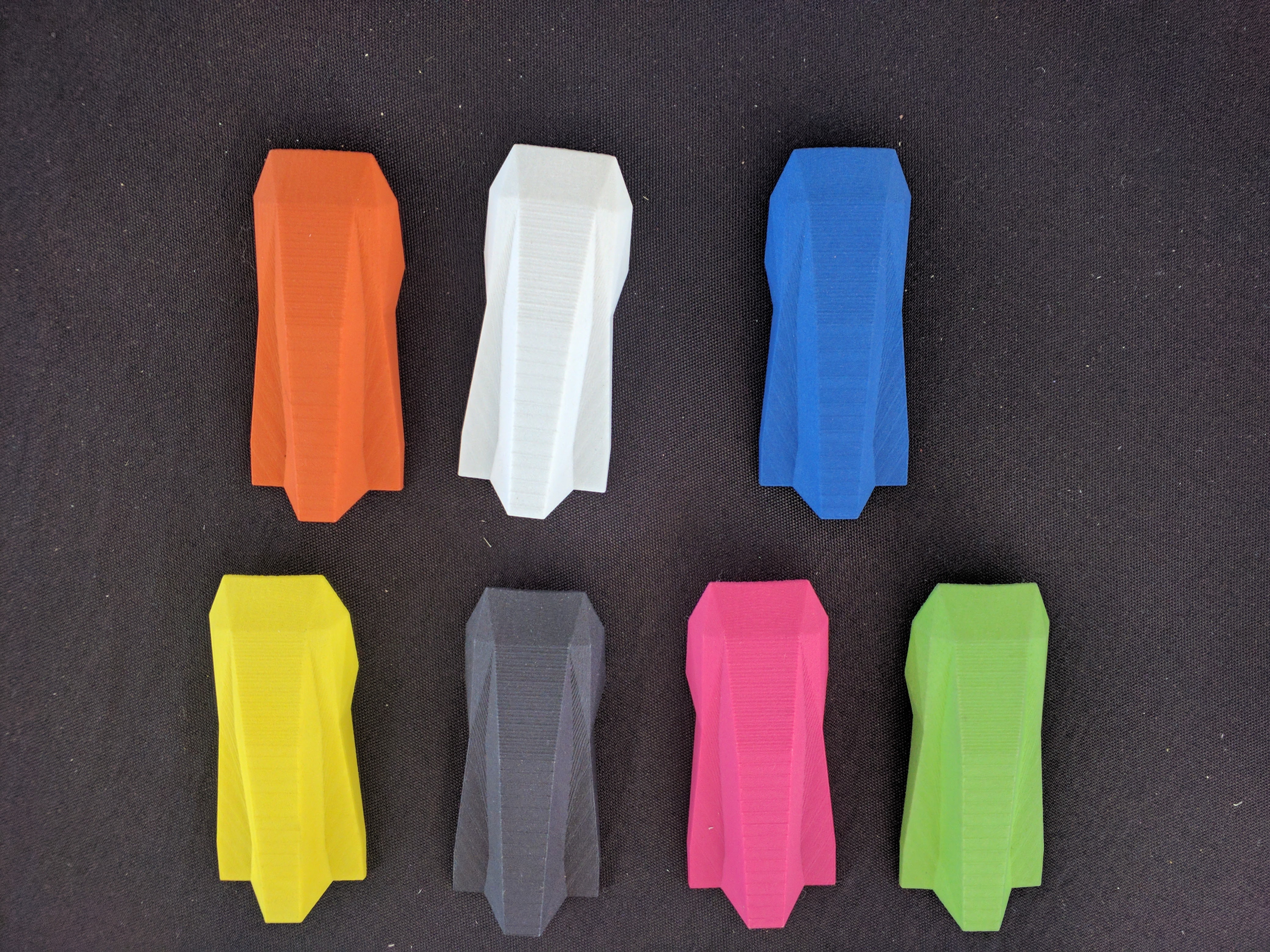 Desktop-style fused deposition modeling (FDM) printers could obviously produce in the color of whatever filament was used. Colors could even be switched between layers to create a rainbow effect. Some manufacturers even toyed with the idea of blending filaments to achieve entirely new colors. But in practice, FDM was and still is very limiting. Colors are determined by layer, not by voxel.

Another option was to add color after a product was printed. At the time, selective laser sintering (SLS) typically offered better quality, and at volume, lower cost than FDM. The white nylon plastic used in these machines was also very receptive to dye. This allowed for more color choice, but was still limiting. Each piece could only be dyed one color and it could only only be used for surface decoration. The interior remained white. But perhaps the bigger issue was wear and tear. Over time the dye would rub off.

At the time, Stratasys was moving towards full color with their Connex3 machines. Based on polyjet technology, they would allow you to select color at the voxel level, however they were limited to a pallet that was made up of 3 colors. In most printing applications, at least 4 colors (cyan, magenta, yellow, and black) are needed to produce “full color.” As a result, the Connex3 could hit some colors, but never the entire spectrum.

MCOR was selling a product that could produce full color, but only on the exterior. Their process involved using plain old copy paper, digitally die-cutting it to shape, and then stacking layer upon layer until a product was formed. Then, they could inkjet the exterior. It did allow for a full-color exterior treatment, but again the interior was white (or whatever color paper you put in the machine).

Perhaps the best way to produce full color was by printing with machines that were first introduced by Z Corporation. These devices allowed inkjet inks to be mixed and applied to a base material at the voxel level. The company was later acquired by 3D Systems and the process was rebranded as ColorJet printing. 3D Systems describes the process this way:

“ColorJet Printing (CJP) is an additive manufacturing technology which involves two major components – core and binder.  The Core™ material is spread in thin layers over the build platform with a roller.  After each layer is spread, color binder is selectively jetted from inkjet print heads, which causes the core to solidify. The build platform lowers with every subsequent layer which is spread and printed, resulting in a full-color three-dimensional model.”

There were some problems with this technology though. The process was slow and the quality of output was mediocre. But the bigger problem was that parts were just too brittle. As a result the technology was primarily used for modeling in medical and architectural applications.

HP shocked the world when it announced it was entering the 3D printing market. At the time, HP spent more in R&D than the entire 3D printing industry was generating in revenue. Most people figured the machines would be disruptive. Over a  year later, HP pulled the cover off their new Fusion Jet 3D printers. 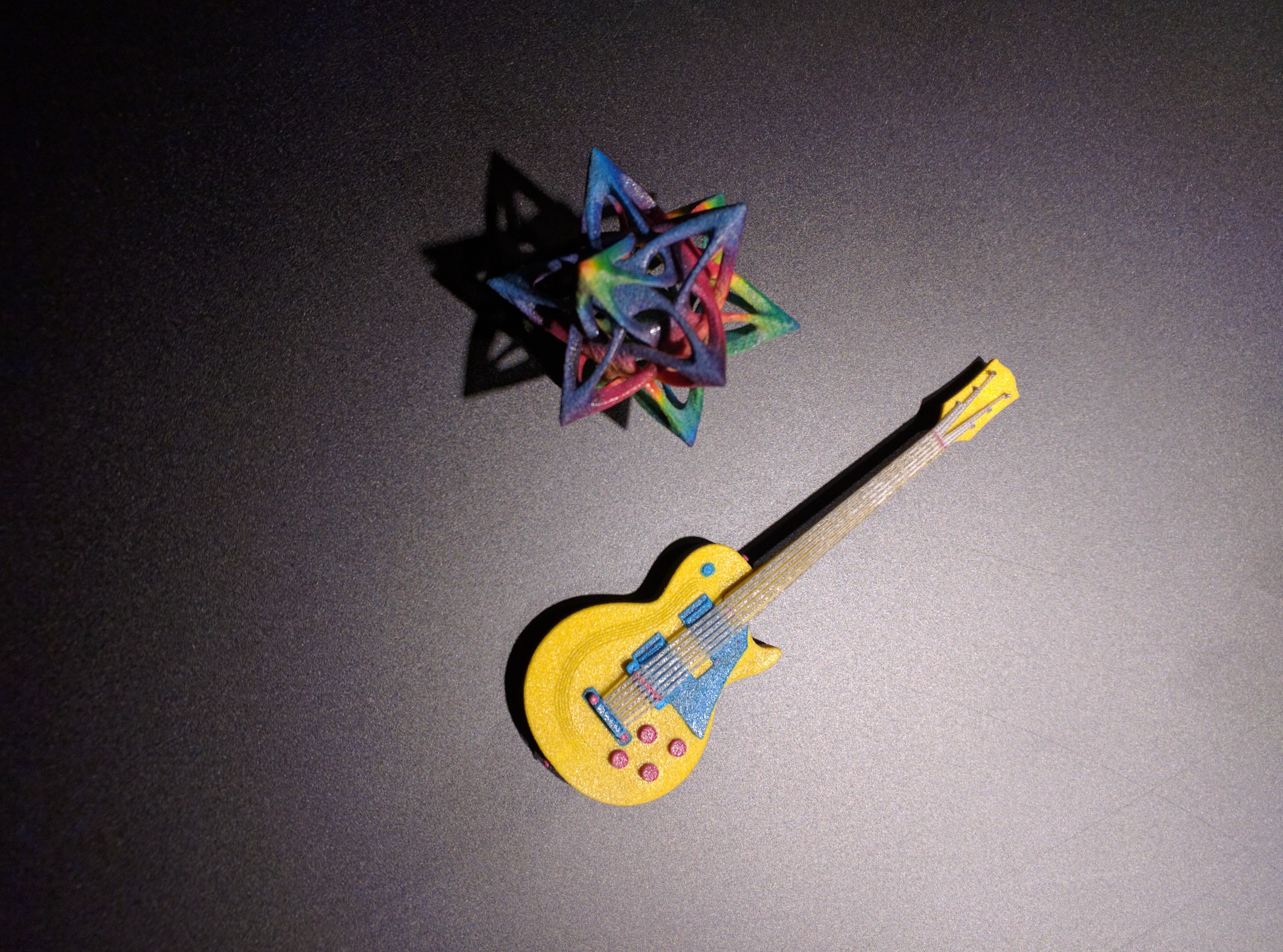 HP’s Multi Jet Fusion technology allows for 3D printing at the voxel level. A “voxel” is a three dimensional pixel, and HP’s printing process uses different “agents” that can be applied to any voxel in a given part, enabling unique properties for each.

Out of the gate, HP launched with devices that print only in black, but making color commercially available is high on the agenda. In an article I wrote about the launch, I noted that with “2D digital printing, the ability to affordably and quickly print in full color created a “hockey stick moment” for the industry.” More than anyone, HP understands that.

Maybe it was the threat of competition, or maybe it was already in the R&D pipeline, but Stratasys also recently announced a full color offering. The J750, also based on polyjet technology now allows for the printing of over 360,000 colors in multiple materials. Right now, it’s the only commercially available printer which can do both.

Others are also offering at least some color capability. Rize recently launched a 3D printer based on a hybrid of FDM and inkjet-based technologies. Their system, which uses augmented polymer deposition (APD), enables them to bind plastic filament with functional inks. Right now it allows them to add one color (cyan) to a part. They plan to eventually offer full color and multi-material properties.

Like HP, other companies from the 2D printing industry are moving into the 3D print market. Canon, Ricoh, and Konica Minolta all come immediately to mind. They all have big R&D budgets and they’re capable of (and experienced at) manufacturing expensive equipment. As importantly, they all benefited from digital printing’s hockey stick moment.  They know that color changes everything.

In 2015, Mimaki announced it would enter the 3D printer business and began developing its own full color 3D printer. The company is now in the commercialization phase of their product. 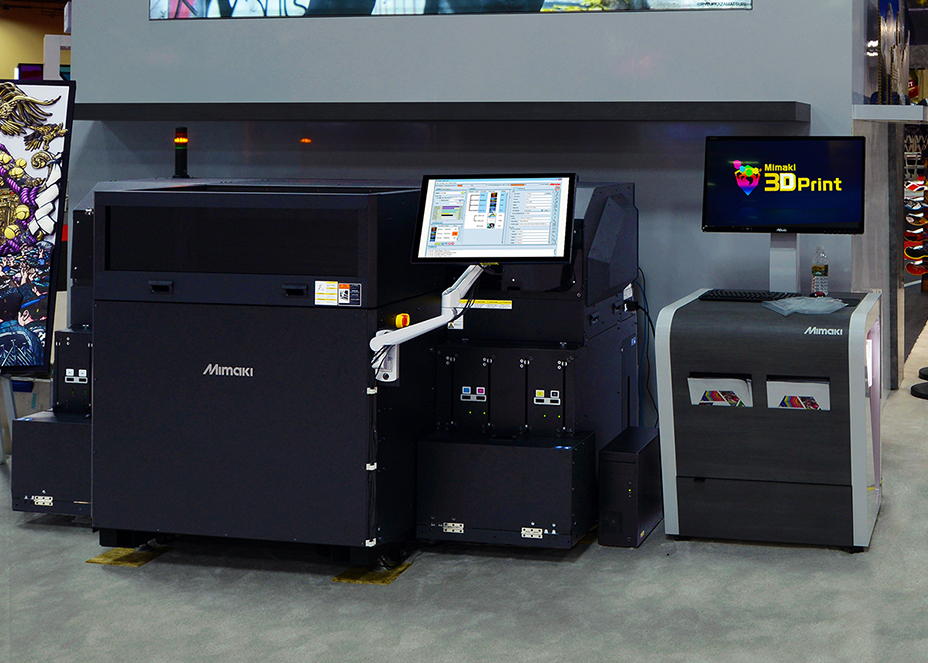 In April, Mimaki USA previewed their technology at the International Sign Expo 2017 show.

If you’re familiar with Mimaki, it’s likely you spent some time in the printing industry. If you’re not, here’s a quick summary. Mimaki Engineering was founded in 1975 in Nagano, Japan, and entered the 2D printing world ten years later with a pen plotter. It’s first full-color inkjet printer was launched in 1996. Today, the company offers a complete line of (2D) digital printers and cutters, and offers a complete solution (hardware, software, and consumables) for many of the killer applications found in the Sign & Graphics, Textile & Apparel and Industrial printing markets.

With all their experience in that business, Mimaki knows a thing or two about color.

“Color has always been a driver in the markets we serve,” says Ken VanHorn, Vice President at Mimaki USA. “Mimaki Engineering has taken its years of experience in ink chemistry and deposition, and brought that to 3D printing.”

It’s obvious that Mimaki is applying what they learned from 2D printing. Consider the benefits of their UV cure inkjet printer technology: 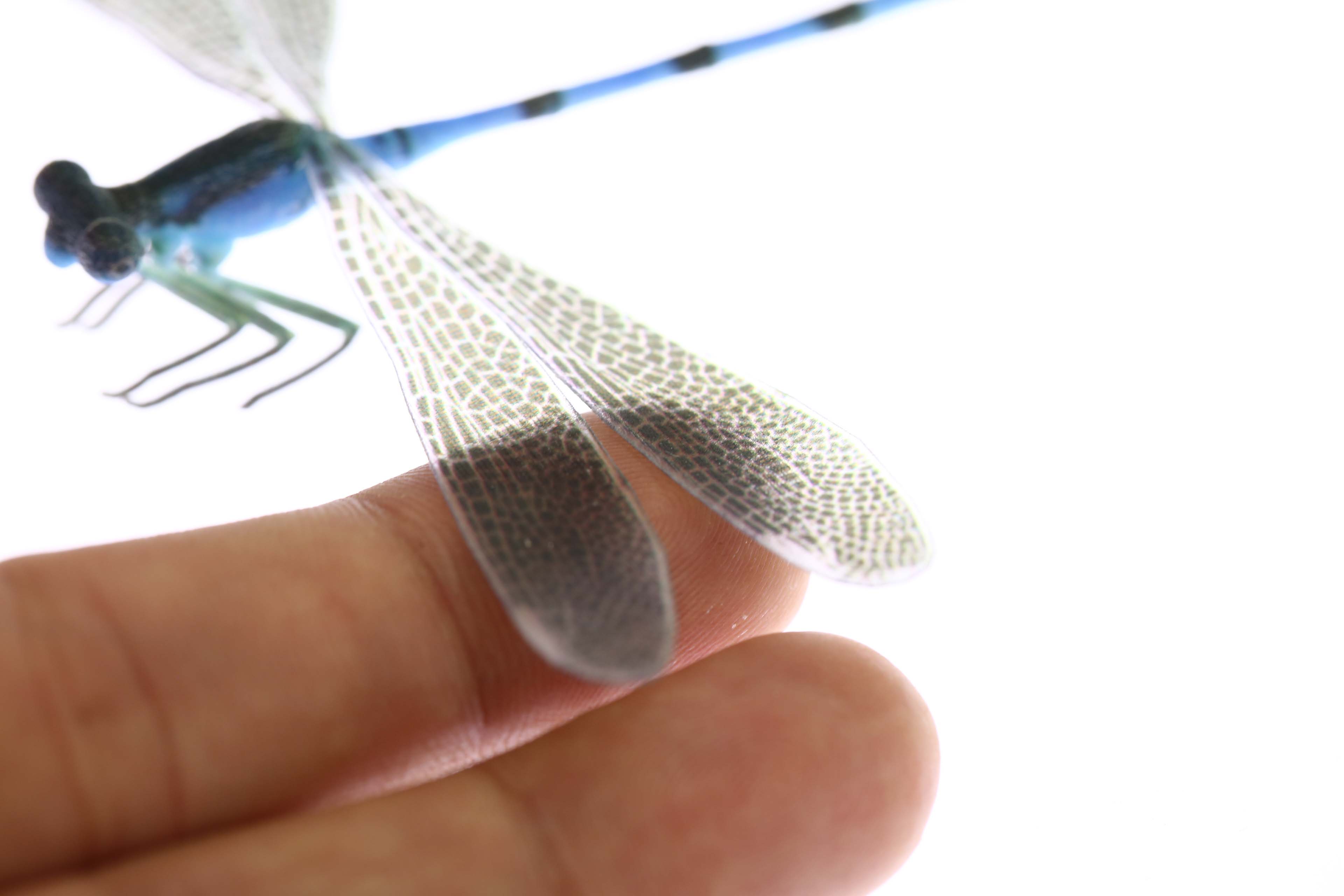 Mr. VanHorn says that Mimaki’s technology is designed to help the 3D printing market benefit from past history. “Color was the big inflection point for 2D printing. We knew it would play a big role in 3D as well,” he says. “Just look at personalized figurines or so-called 3D printed selfies. They were one of the early killer apps for 3D printed consumer products. But in most cases, they were expensive and the product barely resembled the customer. We must do better.”

Of course “selfies” aren’t the only application. Consider the fidget spinner for a moment. Originally conceived as a tool for kids with attention deficit disorders, they’ve now gone mainstream, becoming one of the hottest selling toys of the year. Many of them have been 3D printed. But, as they’ve become more popular, traditional manufacturers have also gotten in on the act.

The differences in product quality are obvious. With traditional manufacturing methods like injection molding, makers of mass produced fidget spinners have added more color. Some even offer LED lighting and other embedded circuitry. They’re not adding colors and lights just because they can. They’re doing it because those things increase the perceived value of the product.

In industrial cases, color plays a more utilitarian role. Whether it’s just for identification, or color is used to assist with installation, maintenance and repair, its obviously beneficial. Just look at the wiring in your car. There’s a reason for so many different colors.

Color is everywhere and it’s not by accident. In a lot of cases there’s science behind it. Color gets attention, it gets retention, and it sells. Color also informs, educates and makes us safer.

While prototyping and models have been a good market so far, 3D printing’s real money is in production. The sooner 3D printing equipment can print high quality color, quickly and at a reasonable cost, the sooner the industry can much more effectively compete with mass production.

Henry Ford once famously said, “you can have it in any color you want, as long as it’s black.” Nowadays you can have your Ford in many different colors. Competition forced the change.

Companies who understand the huge opportunity for color in 3D printing and deliver solutions that empower users to benefit from it, will also have a significant competitive advantage.

Because color changes everything.