Who Wants To Be the Volvo of 3D Printing?

Safety is such a touchy subject in 3D printing. A lot of desktop users get really defensive the minute the subject comes up. Others are in denial. They claim there are no safety issues with 3D printing. But 3D printers aren’t inherently safe. The subject must be addressed and that creates a business opportunity.

Someone could become the Volvo of 3D printing! 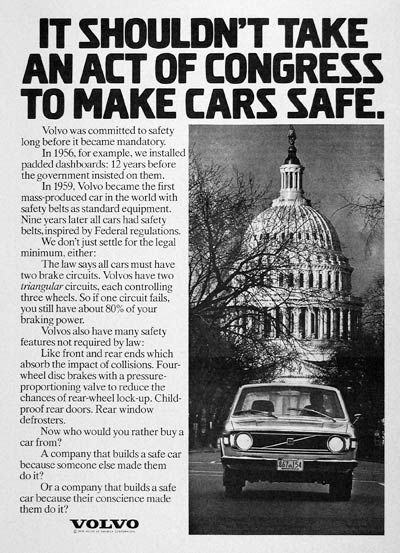 Back in the 60’s and 70’s cars weren’t very safe. Ralph Nader first gained notoriety for his book, Unsafe at Any Speed, which was about safety issues related to the Chevrolet Corvair. Ford had issues of its own. Rear end collisions were rupturing the gas tanks in their Pinto model, causing the cars to catch fire. They weren’t alone. Nearly every major label had safety problems.

One brand saw that as an opportunity. Volvo. Among their many other contributions to automotive safety, Volvo was the first to use laminated safety glass. They also invented and patented the modern three-point safety belt, which became standard on all Volvo cars back in 1959. Even though Volvo granted them free use of the patent, it took other automakers years to incorporate them into their cars. It wasn’t until 1974 that modern, three-point seatbelts finally became mandatory for all cars sold in the USA.

Volvo definitely walked the walk, and as a result their brand became synonymous with safety. It was their competitive advantage, and it took other car companies decades to overcome it.

Safety is a pretty broad topic, but with desktop 3D printing, some of the potential hazards include heat, fire and pollution. Most printers operate with heat, and it is possible that someone or something can get burned. Further, they utilize several electrical components which can spark a fire. During the printing process they can also emit potentially dangerous particles into the air.

There also isn’t a lot of oversight.

In a previous article on the topic, I wrote that the 3D printing industry “ is immature and much of the work that’s gone into creating these devices has been done by startups. Some don’t have prior experience working with consumer electronics. Until recently, very few desktop 3D printers were even UL or CE approved. Off-the-shelf components like power supplies and motors were typically conforming, but the devices themselves were untested.”

I wanted to dig a bit deeper on this topic, so I contacted Norman Lowe, Global Program Manager, Digital Manufacturing at UL. He’s the subject matter expert on 3D printing equipment certification. He estimates that only 20% of desktop 3D printers have been tested by UL. He further estimates that only approximately 50% of all desktop printers have been tested by any safety organization or agency.

Safety Is a Competitive Advantage

Now, I’m not suggesting that the printers being sold today are unsafe. If used correctly, they’re okay. But to some degree it’s like driving a car from the 60’s. Safety is an afterthought. Few in the industry are touting their safety features and no one is synonymous with the term.

Maybe you’re thinking, “if those desktop printer users aren’t concerned about safety, where is the market?”

There has been a critical shift in who is buying desktop machines. A few years ago, most manufacturers were focused on the consumer market. They were convinced there would be a 3D printer in every home.

Then the bottom fell out. 3D Systems exited the consumer business. MakerBot crashed and burned. It seemed that everyone, all at once, made a pivot to business professionals and the education market. The new goal was to put a 3D printer on every desk.

The challenge with that, is that buyers in those markets are more savvy. They’re used to buying commercial equipment. They have expectations, including product safety.

I discussed this in an earlier article when I noted that, in the U.S., “many distributors of educational products won’t even rep a product that hasn’t been UL tested and approved. Large school districts are buying dozens of printers at a time. In their bid documents, they often require verification of testing. Makes sense. They would have difficulty escaping liability if something happened and they didn’t attempt to confirm a product’s safety.”

In another article, I wrote that, “there have been studies which suggest that carcinogens and other ultrafine particles can be released into the environment when certain plastics are melted in 3D printers. Schools are becoming more aware of this.”

Consider this current request for proposal (RFP) from Cobb County School District in Georgia. They’re looking to buy several 3D printers and their specs require that machines should be “UL CSA CE Approved” and that “materials must be non toxic. There should be no air born [sic] dust particles. There should be no glues or bonding agents.”

Want another example? OECM is a not-for-profit group procurement sourcing partner for Ontario Canada’s education sector, broader public sector, and other not-for-profit organizations. A while back they also issued an RFP for 3D printing. In it, they said:

“The Proponent shall provide evidence (i.e. science-based research articles, emission tests) to substantiate that the proposed Products (including consumables and accessories) are well-suited, from a health and safety perspective, for varying environments and users (i.e. primary classroom, behind the counter used by technicians). The Supplier shall, during the Term, make every effort to communicate and advise the Client on Product features and other innovative accessories that will minimize user’s risks in usage of Products.”

So while it may not be a huge concern yet, there is ample evidence to suggest that schools and other institutional users are concerned about safety.

Maybe you’re still not convinced. We can debate the importance of, and market for safety all day. That’s what the comments section is for!

But let’s say you’re buying what I’m selling. You think that safety is a big deal in professional and educational environments and that being synonymous with safety could be a major competitive advantage. How do you capitalize?

Well, let me tell ya.

How To Be The Volvo of 3D Printing

Most of these seem pretty obvious. The bigger challenge is in execution. For example, it’s easy to talk about getting a device UL approved. Doing it is another matter. There’s cost and time involved.

Mr. Lowe told me that costs for UL testing can cost $7,000 – $14,000 for products bound for the North American market. Due to the immense variance in local rules, testing for global certification can be a lot more expensive, in some cases approaching $100K. But there is significant potential for ROI.

Others on my list are less conventional. Consider my suggestion to write a boilerplate. In the old days of sales, we took a consultative approach. One of our goals was to expose pain points. While that intensified the buyer’s need for a solution, it also helped us frame the deal. We could subtly align client needs with our strengths.

Sometimes clients even allowed us to help write their bid documents. This was the holy grail. If we helped write the RFP, we could specify features that only we could provide.

For example, say we discovered that a lot of the client’s copy jobs involved high page counts. We had a document feeder that could accommodate 100 sheets. Others could only do 50. We’d write the bid to include a 100 sheet feeder, knowing no one else could meet the spec.

Times have changed. Many of today’s RFP’s are just copied from others. How hard is it really? Go to Google, find a similar RFP, and copy and paste. 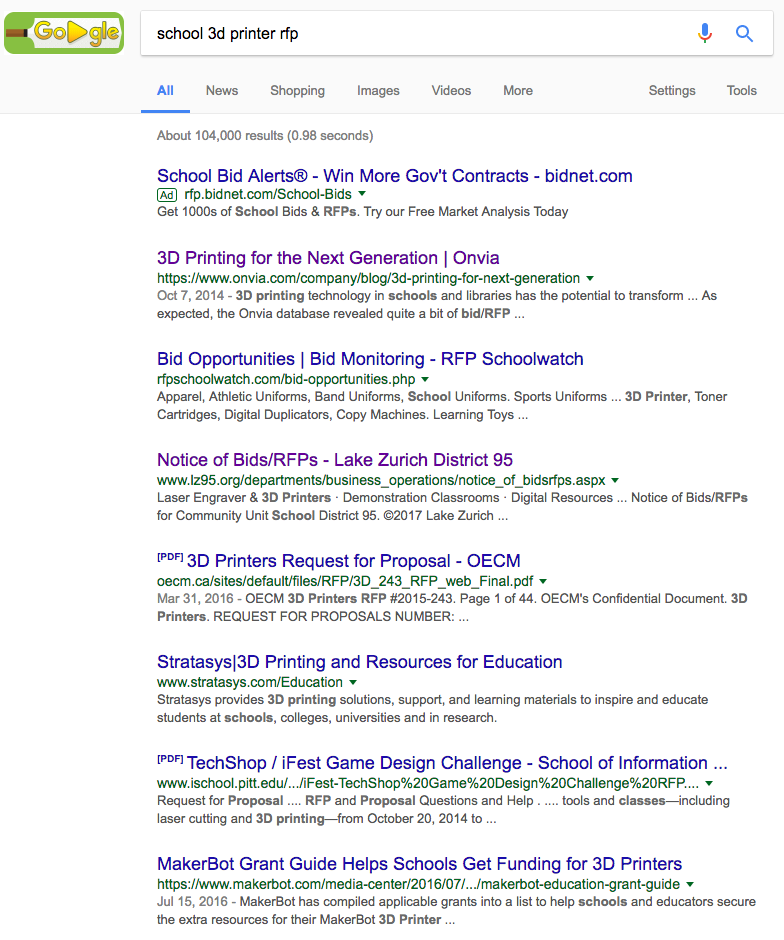 But go ahead and try. Search “school 3D printer RFP” and see what comes up. Mostly bid notices and a couple of old articles. Imagine if on page one, there was a link saying, “Download our FREE 3D printing RFP template.”

How hard would it be to emphasize safety?

If you’re skeptical consider the “disaster recovery” business for a minute. Before Amazon Web Services (AWS), a lot of companies ran web applications on their own servers. Many of those were mission critical, so customers forced vendors to commit to uptime.

Those with strong disaster recovery plans made it a hot button issue early. Others spent a significant amount of time and energy playing catch up.

In the age of the Internet, the tactics are different but the goal is the same. To differentiate.

The Clock Is Ticking

I’m not the only one who sees safety as a differentiator. Companies in the desktop space are starting to get it. Rize recently launched as “the industrial 3D printer that can sit safely on your desk.” Leapfrog just announced a new model that is a fully enclosed and includes an activated HEPA carbon filter.

It’s a start, but far from a comprehensive plan to compete using safety as a differentiator. In Leapfrog’s case it seems like safety is more of an afterthought. On their web page, they don’t even treat it as a separate benefit. It’s just helps make Leapfrog’s printer “suitable for office and factory floors.”

No one today is the Volvo of 3D printing.

No one is really driving the conversation about safety in this market.

Think it could be you? Then let’s talk!

Safe, clean air, is exactly why the Cosine AM1 has an enclosed print chamber with an activated carbon filter. The system scrubs print chamber air 10 times a minute to remove particulates and VOCs. Safety first!